What it means to be a ‘Patriotic Employer’

Joining or rejoining the National Guard is not a casual decision. In addition to the impact on family and personal relationships, how to manage extended assignments with an employer can be a concern.

“It was important to me to have the conversation with Rob before making this commitment,” Patrick said. “I wanted to do my best for the company while fulfilling the requirements of the National Guard.  I’d previously been in the National Guard, so I understood how my absence would impact Rob and the teams I lead. Rob was immediately supportive of my plan.”

Support before, during and after a military leave

Patrick joined the Army Reserve in 1995, followed by more than a decade in an Engineering Installation Squadron in the Minnesota Air National Guard. Despite this history, he had to complete basic combat training again, a 12-week absence where Patrick was virtually unavailable — basic training doesn’t allow cell phones and computers.

“I lead a team of 19,” Patrick said. “While I was going to be away, these teams were working on some really important projects across the company, and I was not reachable. But Rob told me there was never going to be a perfect time to go. He took over those projects for me, allowing me to focus on the commitment I had.”

After nearly three months away, reintegration to the team can be just as complex as being away.

“When I returned, the team was great. Getting back up to speed was easy thanks to their help,” said Patrick. “Lots of communication and planning prior to leaving helps, but the biggest thing was the incredible support I received from Securian Financial, Rob and my teams.”

Recognition as a Patriotic Employer

As Patrick prepares for his next National Guard training assignment at the U.S. Army Cyber Center of Excellence at Fort Gordon in Georgia, he wanted to thank Rob for making it all possible. Patrick successfully nominated Rob for the Employer Support of the Guard and Reserve (ESGR) Patriotic Employer Award, a United States Department of Defense program that recognizes companies that support and value their employees’ service in the National Guard and Reserve.

“The ESGR award is really meaningful to me,” Rob said. “I accept it knowing that our entire team deserves the recognition.”

Patrick and Securian Financial’s Servicemember Associate Resource Group (SARG) are planning additional internal recognition following the Fort Gordon assignment. At that time, SARG will present Rob with a commemorative coin — a long-standing military tradition that honors outstanding contributions by members of the military and civilians.

“Supporting Patrick and any of our military employees and family members – is important to Securian Financial’s culture,” said Rich Binger, Securian Financial’s vice president, Enterprise Technology. “We actively look for the kind of mindset with a sense of purpose and quality that these men and women consistently bring to the table.”

Securian Financial’s Servicemember Associate Group (SARG) is one of several resource groups that support our employees and help create a more aware, respectful and inclusive workplace. The group recently implemented a Battle Buddy program to support employees and their family members who are experiencing a military assignment or deployment. The program provides helping hands and resources before, during and after a military assignment or deployment. 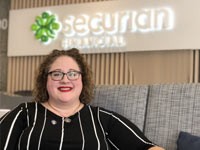 Being a proud parent takes on new meaning  (article with video) 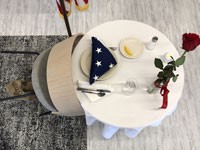 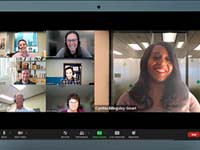 Fuel up: Mentoring helps women and people of color propel their careers  (article with video)