Be alert for financial schemes targeting seniors and vulnerable adults

Be alert for financial schemes targeting seniors and vulnerable adults

You may feel that your money is safe and that you’d never fall victim to a financial scheme — and neither would your loved ones. However, there are bad actors in the world cooking up schemes to separate people from their money all the time — which is why it’s important to stay vigilant and be alert.

Older and vulnerable adults are the most frequent targets

While it’s possible for anyone to be caught unaware in a financial trap, older adults are criminals’ most likely targets — and they’re often successful. Statistics show that criminals often hit their mark: one in 10 Americans who are 60 and older has experienced elder abuse sometime in their lives. A frequent form of the abuse is financial.1 In fact, financial abuse is on the rise, with more than 3.5 million older adults being financially exploited each year.2

And people over the age of 60 who face functional, physical, or mental challenges when caring for themselves are also considered to be vulnerable to financial exploitation — which means their money, personal property or other assets are used illegally or improperly, or taken without their knowledge or consent.

And it’s not just older people. Fraudsters also frequently target people with diminished capacity — also known as vulnerable adults — people who are over the age of 18 who might have a developmental disability, live in a home or a facility, or receive in-home health or social services.

The risk can’t be ignored

It’s no surprise that financial fraudsters would target older Americans who are retired (or nearing retirement) since they tend to have more wealth.

And the costs are high. Older Americans who are exploited by fraudsters experience an average loss of $34,200.2 Older adults lose more than $3 billion each year to financial scams2, while some analysts believe that number could be much higher, because only a fraction of actual incidents are reported.

Often not a random act

While you may be imagining the most common perpetrators are strangers and don’t know the victim, the perpetrator is often someone the victim knows well — and presumably trusts.

There are a number of common scams frequently used to target older or vulnerable adults.

Making people feel uncomfortable is an art for con artists who like to instill fear in people (“If you don’t do X, then Y is going to happen”) or give the impression people might miss out on something (“If you don’t act now, you’ll regret it forever.”)

For example, the scarcity tactic is when someone says there’s a limited supply of something so you better buy that something now before they run out.3

Another gimmick is the social consensus tactic, which indicates that other savvy investors — perhaps in their own social circle — have invested their money and it’s totally paid off for them.3

According to the Federal Trade Commission (FTC), there are several types of fraud that are especially successful on older Americans: online shopping scams, imposter scams, romance scams, sweepstake scams, timeshare sale and resale scams, and tech support scams, which often appear as pop-up “warnings” on computers alerting users of possible virus or security issues. In a recent year, scammers offering their “tech support” stole $24 million from people over the age of 60.2

Robocalls are a major way scammers try to trick people. An estimated 2.4 billion robocalls are made every month, based on data from the Federal Communications Commission (FCC). Often robocalls use fake caller ID information so the potential victim believes the call is originating from their same area code or one nearby, or possibly a government agency. These calls are intended to get the victim to divulge their personal info, buy a product and provide payment info over the phone, or to make payments for nonexistent debts or unpaid bills. Often, they use scare tactics to move you to take immediate action.2

Often robocalls use fake caller ID information so the potential victim believes the call is originating from their same area code or one nearby. These calls are intended to get the victim to divulge their personal info, buy a product and provide payment info over the phone, or to make payments for nonexistent debts or unpaid bills. Beware, too, of sweepstakes scams, computer tech support fraud schemes, and lawsuit or arrest threats.1

Nobody wants to get a call from the IRS. However, it’s worse when it’s someone just pretending to be from the IRS. These con people have been known to tell victims they owe back taxes, and warn them if they don’t send money or provide their Social Security number, they could experience foreclosure, arrest or deportation. California has experienced $10 million in financial loss due to IRS scams.2

Unfortunately, these tools can serve as an easy inroad for dishonest people to get to people who’ve let their guard down and opened their heart. Victims will believe these scammers’ fake profiles and their excuses for not meeting in person. Conveniently, many have used COVID-19 as an excuse to not meet.2

Once a relationship is developed and trust is built between the two parties, the scammer will take advantage of the situation and ask for money or gift cards. It works. People 70 years and older experienced the highest median loss ($9,475) from romance scams.2

Grandchildren hold a special place in their grandparents’ hearts. So when they have a need, grandparents tend to respond — and scammers try to exploit this willingness to help.

Impostors might pretend to be the grandchild claiming to be in need of money for an emergency like a medical emergency, accident, arrest or being stranded in a foreign country. Sometimes they turn over the phone to another scammer, posing as an authority figure like a doctor or police officer, to add to the story.

In all of these cases, the scammer asks for money immediately and to not tell their parents, purportedly to avoid punishment or disappointment (but in reality, to avoid detection).

Thankfully, there are red flags that may appear when someone is experiencing financial exploitation or diminished capacity.

If you care for an older parent or family member, here are some warning signs that could indicate they are being taken advantage of or exploited:

Now you know some warning signs to look for — but before it gets to that stage, try to become familiar with your loved ones’ finances.

For example, what are their bills each month? Also, have a conversation about some things they should do or not do to mitigate their risk of being a victim of financial fraud.

Let them know these are precautions that you’re taking, too. And ask them if they’d like to have a trusted contact person to have as a backup on their financial accounts in case there are any red flags in the future.

If your loved one becomes a victim of fraud, report it to Adult Protective Services, seek help from your police department, and contact the U.S. Justice Department’s National Elder Fraud Hotline at 833-372-8311.5

Fraud isn’t fair. And it seems especially unfair when it impacts vulnerable adults. However, the steps you take now can fortify your defenses and make you less susceptible to a financial attack.

Tips for Navigating the Basics of Medicare  (article with video)

Young families: Considerations for staying at home versus working  (article with video) 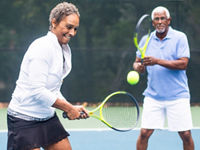 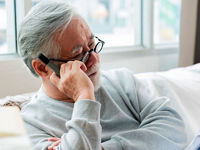 Preparing for a recession  (article with video) 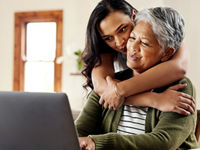 9 smart ways to spend your tax refund  (article with video)