Being a proud parent takes on new meaning

Being a proud parent takes on new meaning

Contradicting elements like these were common in Kristi’s childhood and sometimes made her feel like an outsider. But she found her best friends — who understood what it was like to feel different — in her LGBTQ+ classmates. She’s been an ally of the Pride community ever since.

Her alliance grew in 2019 when her then 14-year-old daughter came out.

“When our daughter was ready to come out to us, she simply said, ‘I think I’m gay,’” Kristi explained. “And we said, ‘We know, Honey.’ We just had a feeling.”

Kristi’s daughter was relieved her parents accepted her. It didn’t go as smoothly with her peers, though. Kids who had been her friends since elementary school no longer supported her. She became depressed — and suicidal.

“We really pulled together as a family at that point,” said Kristi, who is a law services consultant at Securian Financial. “My daughter went to therapy weekly, and on a regular basis I asked her directly if she felt suicidal. We had open conversations. We had to watch her very closely.”

Kristi explained that typically, kids come out in stages. While at first her daughter was nervous to talk with her parents, she became more confident, didn’t want to hide who she was and became an advocate for the Pride community.

Kristi’s child now identifies as transgender, has started taking testosterone and is transitioning to male.

“Once we received approval for our child — who has requested to be called Ren and uses he/his pronouns — by his therapist and doctor to begin testosterone, there was a huge difference,” Kristi said. “He is so much happier, rarely has suicidal thoughts and said, ‘I finally feel like me, Mom.’”

Kristi’s advice for other parents who are helping their kids through similar transitions is to provide unconditional love.

“The biggest thing you can do to accept your child when they come out is to tell them that you love them no matter what,” she said. “This is the most important first step. After that, do your research. Most teenagers these days have done extensive research before they come out so that they understand what is happening to them and how to process their feelings. It is not a phase. Tell them you are there to love and support them in whatever they may need. Ask if they have a preferred name and what their pronouns are.”

But not so many kids feel supported — or allowed — to be who they are. Many are depressed, and many are homeless.

It’s stats like these — and her child’s experience — that have led Kristi and her husband to make their home a safe home for LGBTQ+ kids who are kicked out of their own homes.

“So much of this breaks my heart,” Kristi said.

Kristi has been an active member of Securian Financial’s Pride employee resource group, which works to develop a community for LGBTQ+ employees and allies, and serves as an educational resource for all employees and their families.

“Having the Pride group has been wonderful,” Kristi said. “It shows our company is making diversity, equity and inclusion a priority. It has given me courage to be myself at work and not hide my support for the Pride community.”

Kristi also has been instrumental in developing a Proud Parents group at work for other employees who have LGBTQ+ children.

“It’s an open environment where we bring up our struggles and offer advice to each other,” she explained. “It’s a very open and inclusive group that continues to grow. We talk about everything, because as parents, we need advice and a sounding board to help us better support our kids.”

Sharing her family’s story has helped other Securian Financial employees feel supported at work, too.

“Employees new to the company have told me that hearing my story helped them feel that they joined an inclusive company,” Kristi said.

We’re building a welcoming environment for all through constant learning and conversation.

What it means to be a ‘Patriotic Employer’  (article with video) 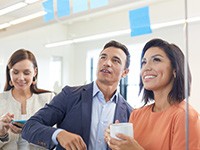